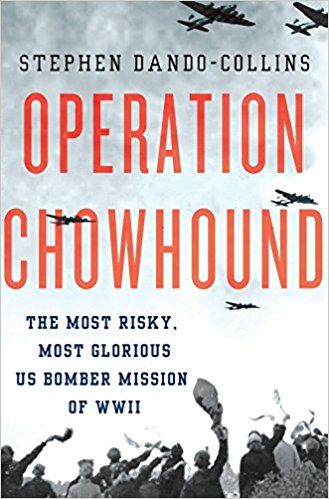 'Dando-Collins chronicles one of the most extraordinary but least known operations of the war.' PROFESSOR PHIL SAMPONARO, University of Texas at Brownsville

'Stephen Dando-Collins can be relied on to tell engaging stories with verve.' PROFESSOR PETER STANLEY, University of NSW at Canberra

The true story of a little-known, yet remarkable World War II operation, which had all the hallmarks of a suicide mission.

Beginning with a crazy plan hatched by a suspect prince, and an even crazier reliance on the word of the Nazis, Operation Chowhound was devised. Between May 1 and May 8, 1945, 2,268 military units flown by the USAAF, dropped food to 3.5 million starving Dutch civilians in German-occupied Holland.

It took raw courage to fly on Operation Chowhound, as American aircrews never knew when the German AAA might open fire on them or if Luftwaffe fighters might jump them. Flying at 400 feet, barely above the tree tops, with guns pointed directly at them, they would have no chance to bail out if their B-17s were hit―and yet, over eight days, 120,000 German troops kept their word, and never fired on the American bombers. As they flew, grateful Dutch civilians spelled out "Thanks Boys" in the tulip fields below. Many Americans who flew in Operation Chowhound would claim it was the best thing they did in the war.

In this gripping narrative, author Stephen Dando-Collins takes the reader into the rooms where Operation Chowhound was born, into the aircraft flying the mission, and onto the ground in the Netherlands with the civilians who so desperately needed help. James Bond creator Ian Fleming, Hollywood actress Audrey Hepburn, as well as Roosevelt, Eisenhower, and Churchill all play a part in this story, creating a compelling, narrative read.