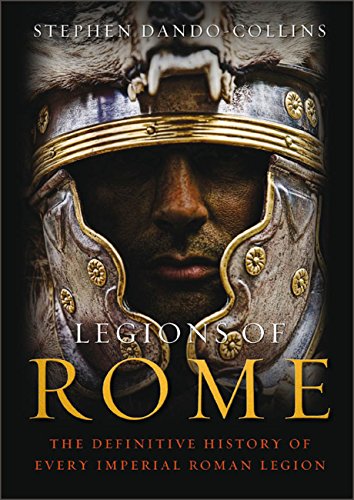 'The single most visually attractive book on the legions to appear in the English language in a hundred years... A magnificent summation to his work as the legions' foremost living historian.' ARTS AND LETTERS MONTHLY, US

'Outstanding... I recommend this book for both its relevance as an overview and its readability.' Major Chris Buckham, THE MILITARY REVIEWER, UK

A NEW STATESMAN 'BOOK OF THE WEEK,' UK

The complete history of every Imperial Roman legion and what it achieved as a fighting force, by an award-winning historian

In this landmark publication, Stephen Dando-Collins does what no other author has ever attempted to do: provide a complete history of every Imperial Roman legion.

Based on thirty years of meticulous research, he covers every legion of Rome in rich detail.

In the first part of the book, the author provides a detailed account of what the legionaries wore and ate, what camp life was like, what they were paid, and how they were motivated and punished.

Part two examines the histories of all the legions that served Rome for three hundred years starting in 30 BC.

The book's final section is a sweeping chronological survey of the campaigns in which the armies were involved, told from the point of view of the legions.

Available in UK, US, Spanish and Russian editions.

Taking Hawaii: How Thirteen Honolulu Businessmen Overthrew the Queen of Hawaii in 1893, With a Bluff